Glastonbury announce that Dolly Parton and many more huge acts will be playing this Summer! 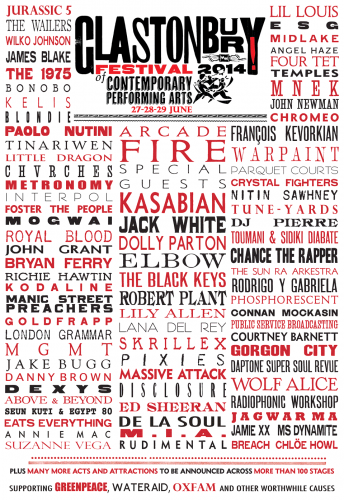 It’s festival season again and we’re all waiting for our favourite acts to be announced on the big stages of the UK festivals this summer. Glastonbury have at last put us out of our misery with an (almost) full line up, releasing an official line up poster, featuring Kasabian, Arcade Fire and our favourite, Dolly Parton as some of the main headliners for 2014.

Last year, Glastonbury founder Michael Eavis promised that the headliners for the 2014 festival would be “three bands who haven’t played Glastonbury”. We had an inkling Dolly might be one of them and we weren’t disappointed! Dolly tweeted: “I’m incredibly excited to FINALLY announce that the #BlueSmokeWorldTour is coming to @GlastoFest on June 29th! Stay tuned for more info…”. Festival organiser Emily Eavis added: “We are delighted to say that Dolly is coming to Glastonbury…It really doesn’t get much better than this!”. Parton’s latest album Blue Smoke was released in Australia on 31th January which coincided with her headline tour dates there. Her forthcoming Glastonbury performance is described as “soon to be legendary” on her website.

Unfortunately, Tickets for Glastonbury 2014 sold out in record time when they went on sale last October, with 120,000 tickets sold in 87 minutes, 13 minutes quicker than last year’s record. But don’t panic, re-sale tickets for this year’s festival are available from April 24! Further big names are expected and there has been persistent talk over many months of an appearance by Fleetwood Mac so keep your eyes peeled!

Check out our Dolly Parton album out here!